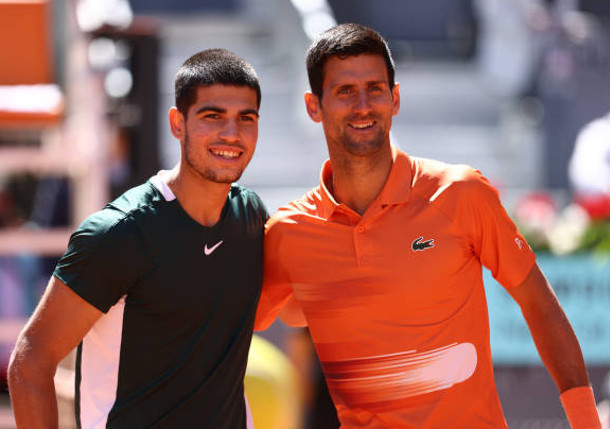 Regardless of ranking, ATP Finals champion Novak Djokovic is driven by one strong belief.

One is the most beguiling number in men’s tennis.

Novak Djokovic is a devout believer in the power of one, which explains his response when asked if he’s the world’s best player in the afterglow of winning a record-tying sixth ATP Finals championship in Turn.

“This week I probably am. Overall the rankings are showing who had the best year, and Alcaraz is the No. 1 in the world,” Djokovic told the media in Turin. “Not much to say about that. But in my mind I always see myself as the best player in the world, of course. I have that kind of mentality and that kind of approach.

Nineteen-year-old Carlos Alcaraz made a monumental mark as the youngest year-end ATP world No. 1.

World no. 2 Rafael Nadal, who won two of the four Grand Slam titles to take sole possession of the men’s major mark with 22 Grand Slam titles, arguably had the best season of all ATP champions.

Alcaraz suffered a season-ending torn abdominal muscle at last month’s Rolex Paris Masters that forced him to pull the plug on his season and denied the world an opportunity for an Alcaraz-Djokovic rematch.

Would Alcaraz’s presence deter Djokovic from roaring through the Turin field with a perfect 5-0 record that saw him make history as the oldest ATP Finals champion to collect a tennis record $4,740,300 payday?

Last May, Alcaraz and Djokovic played a magnificent epic in Madrid that left some Spanish fans stunned by the level they saw.

Alcaraz made history as the first man to conquer king of clay Rafael Nadal and 20-time Grand Slam champion Djokovic in succession at a clay-court tournament.

Playing with poise and passion that was contagious to the home crowd, Alcaraz became the youngest man to defeat the world No. 1 since Nadal celebrated his 19th birthday by beating then-No. 1 Roger Federer in the 2005 Roland Garros semifinals.

Consider Djokovic finished the season on an 18-1 tear and matched Alcaraz for the Tour-lead collecting his fifth title of the season in Turin and you can make a strong case Djokovic, who was unable to play the Australian Open, US Open and four Masters events over his unvaccinated status and Coronavirus pandemic protocols, has all the momentum heading into Melbourne where he will try to win a record-extending 10th Australian Open title.

Coach Goran Ivanisevic says Djokovic is still improving and believes his best tennis is ahead.

“I feel motivated. I feel good in my own body. I take care of myself,” Djokovic said. “Of course, great team of people. As long as there’s that flair happening inside of me…

“Of course, it all starts with emotions. I think how you mentally approach or what is your observation or perspective of tennis, of this sport that you do. For me, that’s love and passion really. As long as that’s there I’ll do anything in my power to challenge the young guys for the biggest trophies.”