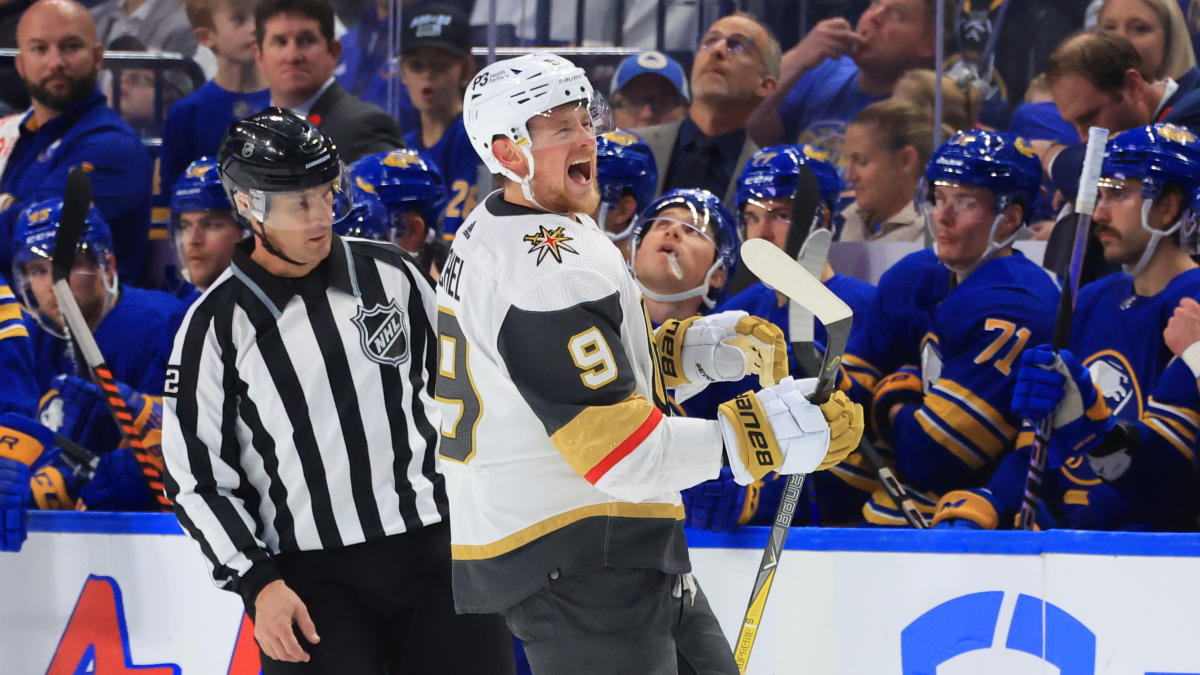 Welcome back to the NHL’s Best and Worst. We’ve got you covered following another wild week of action from across the NHL, with big goals, stellar saves, viral moments, and everything you need to see, hear and know from the past seven days.

Goal of the week

The Toronto Maple Leafs came into this season with big aspirations after taking the eventual Eastern Conference champion Tampa Bay Lightning to a thrilling Game 7 last spring. Despite that, things have been far more sour than they have been sweet, as the team sits at a middling 8-5-3 with just four wins in their last 10. Some have complained about the depth, others have complained about the work ethic . Evidently, things are not going all that well in the center of the hockey universe.

During last Sunday’s game against the Carolina Hurricanes, however, the Maple Leafs gave their fans a jolt when they stole two points on the road with a trip during a back-to-back. A big reason for that win? A gritty performance from their stars, including William Nylanderwho just straight out-muscled perennial Norris Trophy candidate Jacob Slavin off the puck to bury this beautiful goal.

Save of the week

This save by Stars goalie Scott Wedgewood may not be the most conventionally beautiful one you’ll ever see, and perhaps not the most athletic, either. In terms of things you just don’t see every day, however, this one has to be right near the top. Check out the hand-eye by the 30-year-old netminder as, versus Winnipeg Jets last Tuesday, he finds a way to nab a puck floating through the air, gracefully tracking it down like a parrot returning to a pirate’s shoulder. Shiver me timbers!

Star of the week

Jack Eichel is a bad man, and we are all better for it. After a very public breakup, plus a return to the city that drafted him that went rather sideways for the pivot last season, Eichel returned to Buffalo once again — this time putting on an absolute clinic.

The 26-year-old notched a hat trick as part of a four-point night and had his way giving it back to the Sabres faithful. This seems like the start of a very beautiful rivalry.

Hands of the week

Mitch Marner has had his share of ups and downs to begin his season, but there’s no doubt that this assist served as a much-needed confidence boost for the superstar winger. With one hand on his stick, Marner sends the Carolina Hurricanes defenseman Brady Skjei searching for his jockstrap, then makes a great feed to the resurgent John Tavares to give the Maple Leafs a lead they would not relinquish.

Dish of the week

Everybody knows Alex Ovechkin the sniper. 788 career goals, third most all time. 290 powerplay tallies, more than any other NHLer since the league began tracking the stat. What people sometimes forget about The Great Eight, however, is that his pure passing skills are pretty outstanding, too. Ovi’s 636 career assists rank him 78th all-time, and there aren’t many of them that are as pretty as this one.

Worst of the week

Poor Jack Campbell. After signing a 5-year, $25-million contract with Edmonton over the summer, things have started off tremendously poorly for the Oilers‘ newest netminder. Already on the verge of losing his crease to the upstart Stuart Skinnerthe low point for Campbell came last Thursday, when his flubbed clearing attempt led to this brutal goal, as well as a particularly upset reaction immediately thereafter. Here’s hoping things start to look up soon for the NHL’s netminding equivalent of a golden retriever.

Hit of the week

We’ve already discussed Alex Ovechkin’s underrated playmaking abilities, but one thing that certainly hasn’t remained under the radar is the exceptional physical presence Ovechkin brings every night. Take last Wednesday for example, as Ovechkin absolutely steamrolls the Penguins defenseman Jan Rutta who never sees him coming. Later that week, an absolutely insane graphic made its way over to NBC Sports on Ovechkin’s physical dominance relative to his peers, and the numbers were nothing short of shocking.

Players may change jerseys, but there’s no doubt the bonds formed between teammates, however brief, often last well beyond their playing days. During the Ottawa Senators and Philadelphia Flyers‘ first meeting last week, former Philly captain Claude Giroux gave his old netminder a quick hand by getting his stick back to him after it had fallen out of his reach. That’s a classy move by a veteran player, made all the more special based on Giroux’s relationship with the Flyers organization.

Stat of the Week

Hey, did you know that Connor McDavid is really good at hockey? Like, insanely good? Yeah, in case you didn’t, this absolutely bonkers tweet from Jason Gregor segmenting McDavid’s first 500 NHL games shows just how wildly talented the NHL’s best player really is.

Now in his age-36 season, Evgeni Malkin has battled injuries in recent years and seen his production begin to fall back to earth. As the old saying goes, father time remains undefeated. If the Penguins’ modern-day legend has anything to say about those matters, however, he’s made his thoughts loud and clear with his play to start the season. As of November 13th, Malkin’s 16 points have him tied with Sidney Crosby for tops among Penguins skaters, while his nine assists rank second.

This gorgeous dish, in particular, should have the league on notice that Malkin isn’t going anywhere anytime soon.

The Vancouver Canucks have been a mess through five weeks of the season as they continue to limp through the start of their schedule with just four wins in fifteen games. Things have been going very poorly on Canada’s Pacific coast, and there are plenty of people willing to dole out the blame. Things are getting ugly, and it only seems like a matter of time until the other shoe drops. As far as what’s happening on the ice, well, this flubbed shootout attempt to seal another Canucks L from last Saturday feels pretty emblematic.

The return of the flying poke check

Pulling a page out of the Dominik Hasek playbook, Carolina Hurricanes rookie netminder Pyotr Kochetkov goes full out here with the flying poke check to stone Zach Hyman on a breakaway. The stellar save was part of a huge night for the Hurricanes, as they thumped the Oilers last Thursday.

While reports percolated earlier this month that Hollywood superstar Ryan Reynolds was interested in purchasing the Ottawa Senators, it took until the Vancouver native’s appearance on Jimmy Fallon last Monday to officially confirm those rumors. True to his typical humor, Reynolds had a hilarious response when explaining how he would get it done — something NHL commissioner Gary Bettman later repeated. This development ticks off the least likely square on our “2022-23 NHL Season Bingo Card.”

Quote of the week

The master of the soundbite is back, as Brad Marchand quipped on the Bruins‘ beautiful Reverse Retro jerseys last Monday. Nobody has ever said NHL players are fashion models, but goodness gracious Marchand, what sort of cavemen teammates are you calling a proverbial ‘two’ on the 1-10 scale!?

Everybody loves the buzzer beater in basketball, so how about this down-to-the-wire dagger from Los Angeles Kings forward Kevin Fialaas they downed the Chicago Blackhawks in overtime last Thursday night.

This one sealed the Kings’ third straight victory in what has since expanded to a four-game winning streak. The Kings are really starting to find their stride midway through November.

Claude Giroux, as mentioned earlier, will no doubt always be a Flyer at heart. That’s a big part of what made his emotional return to Philadelphia on Saturday night so special. Check out this wonderful tribute video for the club’s No. 2 all-time scorer played ahead of that evening’s game, which saw his Senators thump the Flyers behind a fairytale three-point night from Giroux.

These threads have been a long time coming, having first been teased back in August. Take a look at this slick promo from the team as the Sabers revealed their new throwback goat head look to huge applause and excitement online. The Sabers will wear them for the first time later this month when they play the St. Louis Blues on November 23rd.

Scrap of the week

For our tilt of the week, this donnybrook between Ty Dellandrea and Brendan Dillon was a doozy. Both guys got in a tonne of great shots, as the lively scrap went a good 30 seconds before Dellandrea lost his bucket and the refs called it. Nothing too fancy here, just a good old-fashioned toe-to-toe bout between two dudes that showed they can chuck ’em when needed.

To end things off, we felt it was important to highlight the Maple Leafs honoring Borje Salming, and the powerful reception across the hockey world over the weekend prior to both Friday and Saturday night’s games in Toronto as the 71-year-old continues his battle with ALS.

Wishing Borje nothing but the absolute best, the man is worth every ounce of celebration and praise he’s received this weekend, and then some. A special shoutout also goes to Maple Leafs coach Sheldon Keefe, who started all six of the Maple Leafs Swedish players for the opening puck drop ahead of Saturday night’s game against Vancouver.

After missing the postseason last year, the New York Islanders look as though they are back in a big way to start their 2022-23 season. At the crux of the bounce-back has been the continued emergence of netminder Ilya Sorokin, who has taken his game to another level through the first month of action. Sorokin’s .932 save percentage ranks fourth league-wide, while his 10.1 goals saved above expected, according to Moneypuck.comrank third.

On the skater front, Brock Nelson’s roaring 17 points in 16 games has him leading the charge on Long Island, while Matt Barzal’s point-per-game pace is made all the more impeccable given that he has no goals and 16 assists through 16 games. While the club’s under-the-hood numbers are somewhat concerning, an 8-2-0 record in their last ten has them sitting second in the Metropolitan Division, while Sorokin’s early Vezina candidacy could keep them in the hunt for the foreseeable future.

Prior to a 3-2 victory Saturday night over the Winnipeg Jets, the Flames had lost seven straight dating back to the end of October. Currently owning a 6-6-2 record, things in Calgary certainly have not started off the way fans had hoped after an offseason retool that put them in an echelon with other Stanley Cup contenders. There are some reasons to believe this is the start of things turning for Calgary, namely that they have had an extraordinarily tough start to their schedule, however, middling production from big names like Jonathan Huberdeau are an enormous red flag.

They’ll need a lot more out of their big offseason acquisition, as well as several other key cogs, if they’ll have any hope of turning things around and playing like the Cup contender they were built to be.

See a highlight worthy of the spotlight? Tag @JNeginShecter on Twitter using the hashtag #BestAndWorst and it may be featured in the following week’s edition of NHL Best and Worst.