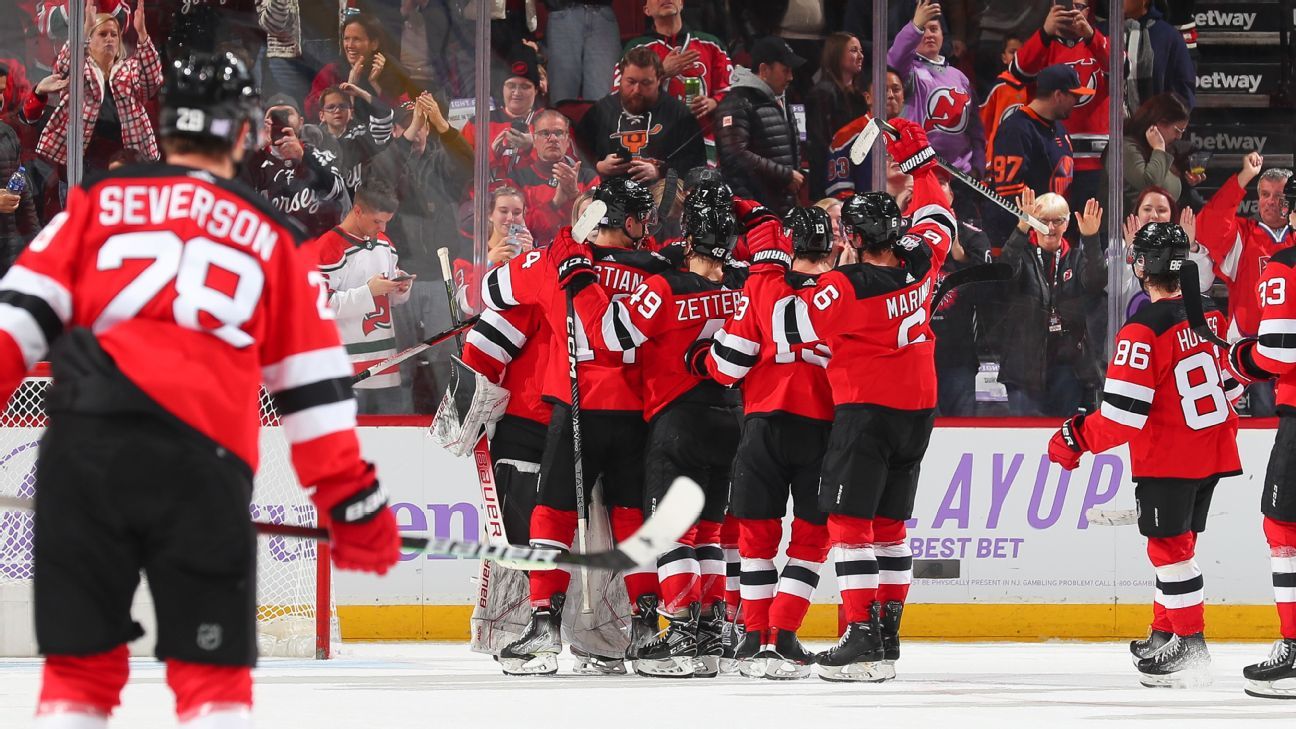 NEWARK, NJ — As the New Jersey Devils celebrated their franchise-record-tying 13th consecutive victory on Monday night, a sold-out home crowd rose to its feet to commemorate the moment.

“I think the team deserves a standing ovation. A run like this is incredible,” said Devils coach Lindy Ruff following his team’s 5-2 win over the Edmonton Oilers.

The Devils previously won 13 straight games from Feb. 16 to March 23, 2001, a team that would go on to play for the Stanley Cup. Their current streak started on Oct. 25 and has fueled New Jersey’s stunning surge to the top of the Metropolitan Division (16-3-0) after finishing 28th in the NHL last season.

“We’re up there [in] the history book. Nobody’s gonna take that from us now,” said the captain Nico Hischier, who had three assists in the win. “It proves that we’re a good team. That we can win hockey games. That we don’t have to hide anymore.”

The Devils can set a new franchise record for consecutive wins when they meet the Toronto Maple Leafs at home on Wednesday night. The all-time NHL record for most consecutive victories is 17 straight, set by the 1992-93 Pittsburgh Penguins — a streak that ended with a tie against the Devils in the last game of the regular season.

Monday marked the second time New Jersey has defeated Edmonton during this current win streak; the Devils rallied to beat the Oilers 4-3 in Edmonton on Nov. 3.

New Jersey jumped out to a lead Monday night on the winger Jesper Bratt‘s first-period power-play goal, his eighth of the season. Edmonton answered with its own power-play tally from star Leon Draisaitl (11th). But the Devils built a lead they wouldn’t surrender during the second period on goals by center Dawson Mercer — scored thanks to a miscue by the Edmonton goalie Stuart Skinner — and defenseman Damon Seversonset up by pinpoint passes from Bratt and center Jack Hughes (two assists).

Edmonton pulled within one goal thanks to a Ryan Nugent-Hopkins tally at 4:52 of the third period, but the Devils answered back just under 2:15 later as Tomas Tatar gloved his own rebound and then smacked the puck past Skinner. Yegor Sharangovich closed out the scoring after an Oilers turnover at 14:45 of the third.

Goalie Vitek Vanecek, who has appeared in 10 of New Jersey’s 13 straight victories, made 27 saves to clinch the win. Vanecek was acquired from the Washington Capitals in the offseason.

“It’s great to be here. When you’re winning it’s more fun. If you’re losing, it’s not fun, you know? So we’re winning right now, and it’s really fun,” he said.

Ruff praised the effort of Vanecek and his entire team, but cautioned that any celebration comes with a sense of the long road ahead for the Devils.

“I feel like we haven’t proven anything yet. I think we’ve done a lot of good things. We’ve played good hockey. But we’re 19 games in,” he said. “We’ve had a great run, but we know we’re the hunted now. We can expect the best that every team can bring because we’re getting recognition. That part we’re going to have to deal with.”

For now, the Devils are enjoying a hot streak that’s matched anywhere in the history of the franchise.

“It’s definitely one of the most fun stretches I’ve ever been a part of,” Hischier said. “I don’t want it to end. It’s definitely just fun. Like we say, just keep riding away the wave.”