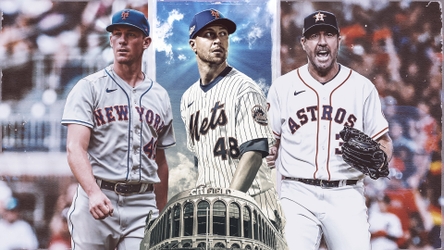 The MLB offseason is now in full swing, with the Winter Meetings less than two weeks away, and some big moves already being made.

For other teams, it has meant pouncing on one of the more intriguing starting pitchers on the market (as the Los Angeles Angels did with Tyler Anderson), extending their own late-inning relievers (as the San Diego Padres did with Robert Suarez) or non-tendering a former MVP (as the Dodgers did with Cody Bellinger.

While things are warming up, they’re not percolating just yet. But SNY’s Andy Martino reported on Monday that there could be some decisions made by the biggest names on the market between Thanksgiving and the start of the Winter Meetings on Dec. 4.

With that in mind, let’s reassess the Mets’ free agent targets and priorities…

Figure out who the second ace is

Max Scherzer will be back at the top of the rotation, and the Mets exercised the $14 million team option they held on Carlos Carrasco for 2023.

And while the Mets don’t necessarily need a second ace to go along with Scherzer, it sure seems that they’re looking for one.

So far, the Mets have been connected to Jacob deGrom (duh) Justin Verlander, Kodai Sengaand Jameson Taillon. The outlier here is Taillon, who is most certainly not an ace. But the Mets’ parallel pursuits of deGrom, Verlander, and Senga (they have already spoken with all three) is notable.

Perhaps another interesting thing is that the Mets haven’t been connected to Carlos Rodon, who has been an ace the last two seasons but comes with serious health concerns. But there hasn’t been much buzz about Rodon’s market at all. Perhaps he’ll be one of the last dominos to fall.

Martino reported Monday that the Mets are hopeful deGrom will choose them, but has previously reported that while New York wants deGrom back, they might not be prepared to outbid any team for him. And if one team (the Texas Rangers?) comes in and offers deGrom a guaranteed four-year deal worth $180 million or so, that might wind up being his new home.

The deGrom situation is what makes this so complicated, and is why the Mets have multiple balls in the air.

DeGrom is the best pitcher in the sport. Verlander is an ace coming off a Cy Young season. Senga could be an ace, but is also a bit of a mystery. And they could all find new homes in the next few weeks.

As far as Senga, it’s possible the Mets sign him and one of deGrom or Verlander, which would give the rotation quite a jolt.

Assess the competition for Brandon Nimmo

When it comes to the free agent outfield market, there’s Aaron Judge, who is obviously the biggest fish. But the next best player available is Nimmo, who has been one of the most productive offensive outfielders in baseball the last five seasons and recently turned himself into a plus center fielder.

So it comes as no surprise that the market for Nimmo is robust.

Martino reported earlier this offseason that the Mets were prioritizing Diaz and Nimmo over all of their internal free agents, and reported on Nov. 17 that the Mets remain in pursuit while noting that Nimmo’s market already includes the Yankees, Colorado Rockies, and Toronto Blue Jays. And a new team entered the mix on Monday, with the San Francisco Giants expressing interest.

It’s clear that Nimmo is going to get a significant deal in terms of both years and dollars, and it could wind up being well over $100 million. Does the bidding go to $120 million? $150 million?

If the Mets retain him, it might affect pursuits of other high-impact free agents.

If the Mets don’t retain him, they’re going to have a huge hole in center field (which might be filed by Starling Marte) and a big vacancy at the top of the lineup.

Come up with Plan B’s

In a world where the Mets don’t sign deGrom or Verlander, all types of possibilities could open up.

It’s fair to believe that a 2023 Mets team without deGrom or Verlander would have either Senga, Taillon, Chris Bassitt, or a similarly-priced free agent starter on it. Maybe they’d even go after Rodon. And while any of those guys would take up a decent chunk of the payroll, they won’t take up nearly what deGrom or Verlander will.

And if the Mets don’t have to dedicate $45 million or so of their payroll for the next three seasons or so to another starting pitcher, does that mean they make a run at Trea Turner or Carlos Correa or Xander Bogaerts?

While the top shortstops on the market aren’t a perfect fit for the Mets due to the presence of Francisco Lindor, they are all game-changing offensive players. And Turner has experience playing second base.

Another possibility is Shohei Ohtani.

Angels GM Perry Minassian said earlier this offseason that the club wouldn’t be trading its generational two-way megastar this offseason, but it’s hard to believe that stance won’t change if Los Angeles gets the sense that Ohtani — set to be a free agent after this season — won’t sign with them long-term.

The Mets exercised their option on Daniel Vogelbach for the 2023 season, but he’s probably a better fit as a bench player and part-time starter at DH than he is as the long end of a DH platoon.

While the lefty-hitting Vogelbach is a strong performer against right-handed pitchers, he cannot be relied on against left-handers, is not really playable in the field, and is a serious liability on the bases.

That means the Mets should be looking to fill their DH role in another way.

Does that mean a pursuit of free agents Jose Abreu or JD Martinez?

Could it mean relying on Mark Vientos or Francisco Alvarez to help fill that spot?

No matter what happens, the next few weeks should be incredibly intriguing.