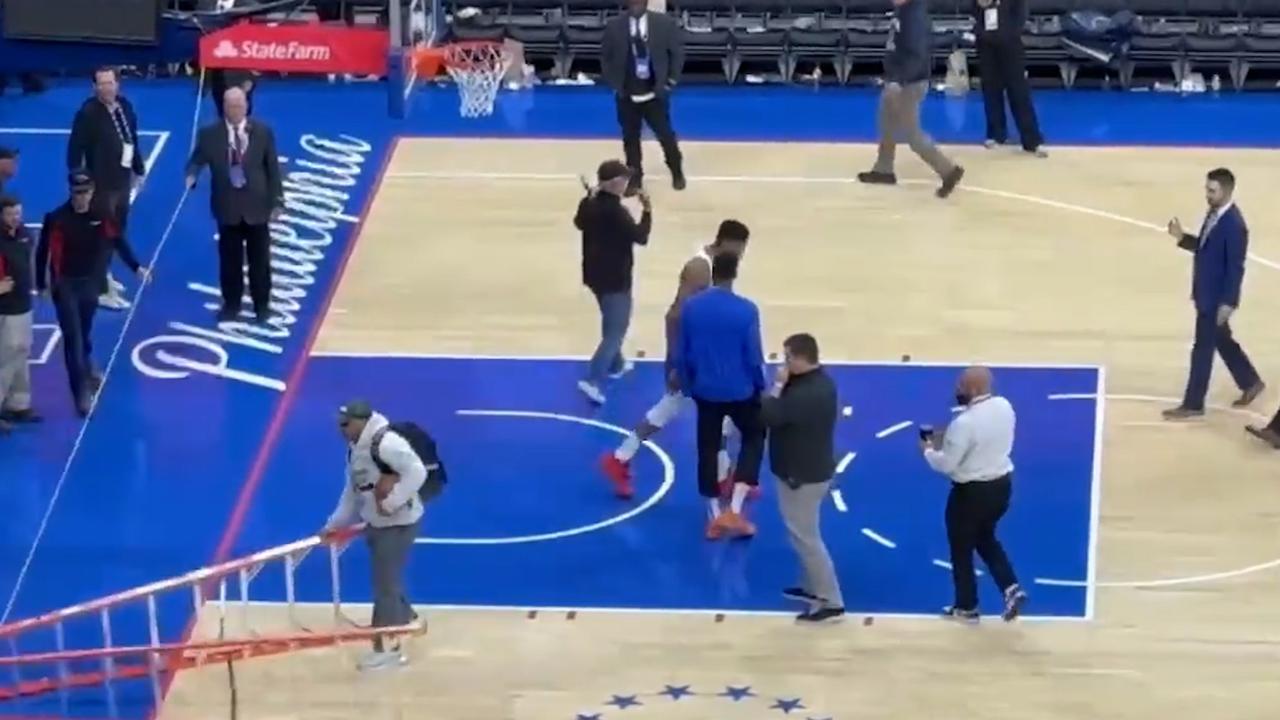 Milwaukee Bucks superstar Giannis Antetokounmpo has been criticized after clashing with employees at the Wells Fargo Center in Philadelphia on Saturday (AEDT).

Fresh off a 110-102 defeat at the hands of the Sixers, Antetokounmpo stayed out on the court to practice his free throws, after going just 4-of-15 from the charity stripe.

Employees were looking to pack up, though, with a ladder in front of the basket Antetokounmpo was looking to shoot at.

A visibly frustrated Antetokounmpo was seen speaking to employees, before pushing the ladder to the ground.

“Giannis full of s*** for this!!! Real Talk,” former NBA player Kendrick Perkins tweeted in response to the video.

Philadelphia’s Montrezl Harrell wasn’t too impressed either, while fans and pundits alike weighed in on Twitter.

It didn’t go well for Antetokounmpo after the ladder was removed, with the Bucks star missing four straight from the free throw line.

Joel Embiid scored 32 points and out-dueled Antetokounmpo to lead the injury-depleted hosts to victory over the Bucks.

The Sixers, missing James Harden, Tobias Harris and Furkan Korkmaz going into the contest, lost Tyrese Maxey to a foot injury at halftime.

Maxey delivered 24 points before he limped out late in the second quarter. Georges Niang came off the bench and scored 17 points, but it was Embiid’s 19 second-half points that propelled the 76ers past the Bucks, who led 62-55 at halftime.

Embiid — coming off 42-point and 59-point performances — added 11 rebounds and eight assists as the Sixers notched a third straight win.

The Boston Celtics rolled to a ninth straight victory while Dallas Mavericks star Luka Doncic notched another milestone with his 50th career triple-double.

The Celtics improved their league-leading record to 13-3, their latest long-range barrage burying the Pelicans 117-109 in New Orleans.

Each of Boston’s five starters scored in double figures and each drained at least two of the Celtics’ 20 three-pointers — Derrick White connecting on six.

New Orleans cut a 13-point deficit to six midway through the fourth quarter. But despite 17 turnovers, including nine in the third quarter, the Celtics were able to turn it up a notch and snap the Pelicans’ three-game winning streak.

Meanwhile in Dallas, Doncic delivered another gem in a 127-99 victory over the Denver Nuggets.

Doncic scored 33 points with 12 rebounds and 11 assists and at 23 years and 263 days old in his 279th game became the second-youngest and second-fastest NBA player to 50 triple-doubles.

Oscar Robertson was 23 years and 32 days old when he achieved the feat in his 111th career game.

It marked the 25th time that Doncic scored at least 30 points in a triple-double. He’s got four 30-point triple-doubles in 14 games this season.

His Friday exploit came against a Nuggets team missing two-time Most Valuable Player Nikola Jokic, who missed a second straight game due to Covid protocols.

In Memphis, Jaren Jackson’s 25 points and 12 rebounds led the Grizzlies in a 121-110 victory over Oklahoma City, but it could prove a costly win after Grizzlies star point guard Ja Morant departed late in the contest with a left ankle injury.

Morant and John Konchar scored 19 points apiece for Memphis, who were up 106-100 with just over three minutes remaining when Morant was hurt and helped off the court.

Australian Josh Giddey was Oklahoma’s best, finishing with 20 points, 11 assists and six rebounds on a day Shai Gilgeous-Alexander struggled to get going.

The Cavaliers needed two overtimes to put away the Charlotte Hornets 132-122 in Cleveland.

Darius Garland scored 41 points and Donovan Mitchell added 34 for the Cavs, who saw their 10-point lead erased in the final 52.4 seconds of regulation as Charlotte poured in four three-pointers — two of them from Terry Rozier.

After Charlotte failed to capitalize on a chance to win in the first overtime, Cleveland dominated the second extra session.

It went to overtime in Washington, where the Wizards edged the short-handed Miami Heat 107-106.

Bradley Beal scored 27 points, Kyle Kuzma added 21 and Kristaps Porzingis added 20 with 17 rebounds for the Wizards, who outscored Miami 3-2 in the extra period to squeak out the win.

Kyle Lowry had a triple-double of 24 points, 10 rebounds and 15 assists and Max Strus added 22 points for Miami, who had just seven healthy players and had Gabe Vincent in uniform, despite a knee injury, to meet the eight-player roster minimum.

It was close in Chicago, where Jalen Suggs’ three-pointer with five seconds remaining gave the Orlando Magic a 108-107 victory over the Bulls.

Later, Golden State got back to winning ways, downing the New York Knicks 111-101 to improve to 7-9 on the season.

Meanwhile, the Los Angeles Lakers secured their fourth win of the season with a 128-121 takedown of the Detroit Pistons.

Without LeBron James again, Anthony Davis led the way with a massive 38-point, 16-rebound performance, while Russell Westbrook added 10 points and 12 assists off the bench.