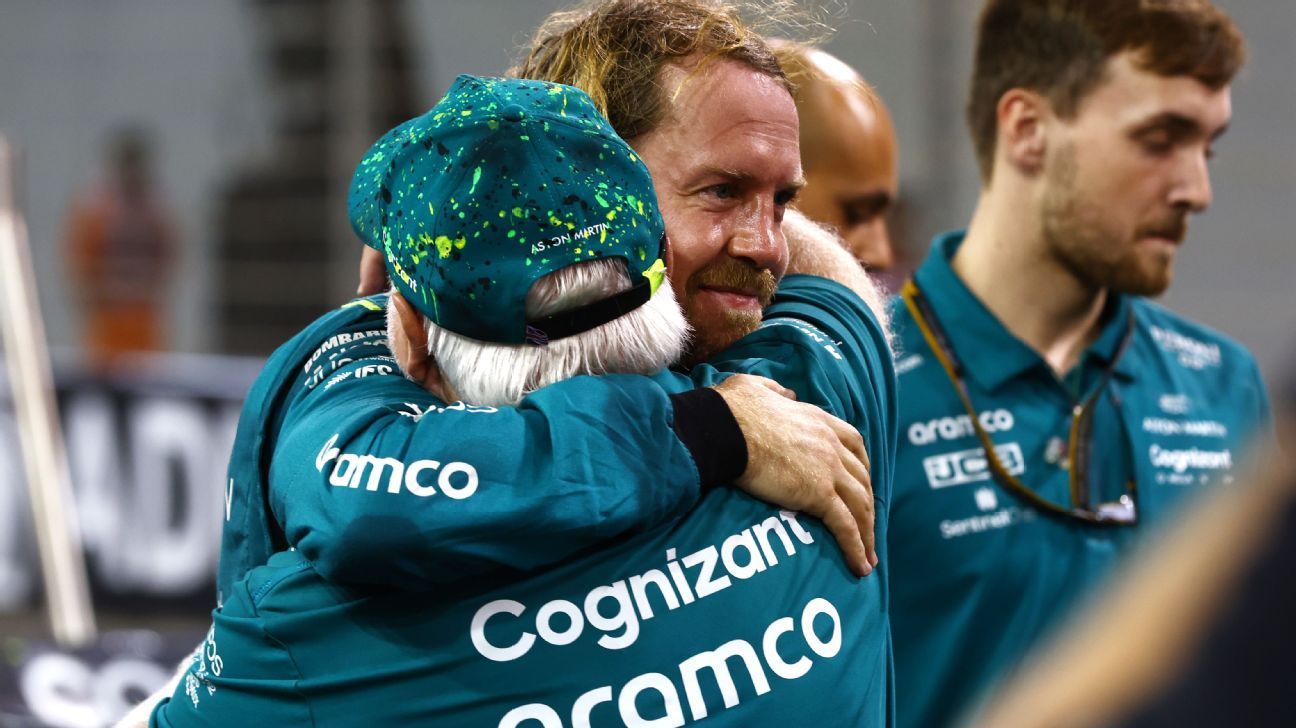 ABU DHABI, United Arab Emirates — Before climbing into a Formula One car for the final time ahead of a grand prix, Sebastian Vettel did a lap of the Aston Martin garage to thank each and every mechanic. It was a simple gesture, but one that meant a huge amount to his colleagues and one that summed up the character of the man at the center of it all.

On the grid, Vettel’s fellow drivers lined up side by side to give him a guard of honor as he returned to his car following the United Arab Emirates’ national anthem, underlining the respect each one feels for him.

Then, shortly before the start of the race, Fernando Alonso, who was once Vettel’s on-track nemesis when they fought for the title ten years ago, leaned over the cockpit of the Aston Martin to wish his old rival good luck. Starting one place behind Vettel on the grid, he also informed the four-time world champion that he would not attempt to pass him on the opening lap.

“I didn’t want to attack Seb,” Alonso told reporters after the race. “I just wanted to do a few laps behind him and enjoy.”

Fifty-seven laps later, Vettel crossed the finish line for the final time to score a single point in tenth place. But the result didn’t matter.

On Sunday evening in Abu Dhabi, Vettel achieved something far more remarkable than any on-track victory — he left F1 as one of the most respected and loved drivers in the sport.

The goodwill towards Vettel, which was displayed at various points throughout the weekend from all corners of the paddock, underlined the German’s popularity, which is far greater now than it was when he won his fourth and final world championship in 2013.

On the Thursday before the race, another former rival, Lewis Hamilton, organized a dinner for all 20 drivers in Abu Dhabi to say goodbye to Vettel in a private and relaxed setting. The seven-time world champion, who also picked up the bill, said it was among his most memorable evenings in F1.

“I think it was really important, so that’s why I asked the group in Mexico whether they would be open to all doing a dinner to give Seb a farewell,” Hamilton said.

“We haven’t had a dinner since years ago in China [2016], it was the best evening. Everyone was laughing so much, great stories, Seb is a great leader.

“He made a great speech, really trying to hand down some of the experiences he’s had over these years. Particularly to the younger guys because they’re the future.”

To mark his final race, Vettel also organized a track run on Saturday night, inviting everyone in the F1 paddock to complete one last lap with him. Hundreds attended, to the point that the huge stock of farewell t-shirts printed by F1 to commemorate Vettel’s final race ran out in all sizes.

Vettel, 35, advised participants to “run at your own pace and take it easy” before signing off a short speech by saying, “thank you Formula One for all these years and thank you to all of you for coming together. I thought it would be a nice idea to invite everyone along.”

Vettel’s father, Norbert, wife, Hanna, and three children completed the lap on the back of the flatbed truck usually used for the prerace driver parade. A jubilant Norbert Vettel exerted almost as much energy as the runners as he danced to music from the circuit’s loudspeakers and encouraged those on the track to keep up the pace.

But by Sunday evening after the race, Vettel said he felt “empty”. Four days at the track in Abu Dhabi was never going to do justice to such a rich career that spanned 16 seasons. The full effect of the emotion had yet to sink in.

“It is strange,” he said after the race. “Obviously, the exhaustion in a way kicks in, it’s been a busy weekend.

“I think it will hit me at some point — probably when I go to bed tonight or tomorrow morning.”

On a one-stop strategy, which failed to yield the result he had hoped for, Vettel ended up going wheel-to-wheel with 15 of the 20 drivers on the track. In the vast majority of those battles he came off as the victor, and although he only just snuck into the points, the nature of his drive was fitting of a four-time champion. At the finish line he added an extra point to the 3,097 he had amassed in his previous 298 races and celebrated in style with a series of donuts on the pit straight.

But as impressive as Vettel’s statistics are, including becoming the youngest champion in the sport’s history back in 2010, the essence of his career is about far more than numbers.

During his four years of dominance between 2010 and 2013 with Red Bull, Vettel was a formidable competitor and often looked unbeatable. His success won him a legion of fans, but it wasn’t without controversy.

Following a collision at the 2010 Turkish Grand Prix while fighting for the lead with teammate Mark Webber, the atmosphere within the team had a tendency to turn sour. Vettel, with the support of Red Bull’s advisor Helmut Marko, would sometimes appear entitled and petulant — a perception that was vindicated when he ignored team orders to finish second at the 2013 Malaysian Grand Prix by overtaking Webber with a handful of laps remaining.

What was never in doubt during the final years of F1’s raucous V8 era was Vettel’s ability to draw the maximum from the car. By the end of 2013, when he was just 26 years old, he looked the most likely driver to challenge Michael Schumacher’s record of seven world titles. But the success suddenly dried up in 2014 when a change in engine regulations saw Hamilton and Mercedes take over as the dominant force in F1, while Vettel faced an internal threat from Daniel Ricciardo at Red Bull.

A switch to Ferrari in 2015 seemed like the right move at the right time, but the combination of team and driver never really clicked. He arrived hoping to emulate the glory years of his hero Schumacher, yet ultimately fell well short.

Ferrari’s unsettled leadership was part of the reason — the Italian team cycled through four team principals during Vettel’s time at Maranello — but he also made mistakes, most notably crashing out of the lead at the 2018 German Grand Prix, which marked the turning point in what had previously been a tight championship battle with Hamilton.

Although further championship success remained elusive for the remainder of his career, Vettel matured significantly away from the track. In his 30s and after becoming a father, he became far more reflective and by the time he left Ferrari at the end of 2020 to switch to Aston Martin, his focus had broadened to issues away from F1, most notably the environment.

At his final race, Vettel wore a t-shirt with an image of the earth from space and the message “invitation”. In doing so he broke the FIA’s rule on wearing anything other than approved racewear on the grid ahead of a grand prix, but made one last stand as an F1 driver to encourage the sport and its fans to act against the threat of climate change.

The hypocrisy of campaigning for green values ​​while driving a racing car at 22 far-flung venues around the globe is not lost on Vettel, and was among the factors that led to his decision to retire. Nevertheless, his determination to push environmental messages has applied pressure on the sport to follow through on its pledges to go carbon neutral and develop carbon-zero fuels, even if both objectives are still several years from being achieved.

“There are far bigger and far more important things than racing in circles, but obviously it’s what we love,” Vettel said. “Through that, if we can transfer some of those important values, I think that’s really big and for that, I think the last two years have been great for me.”

As final as Vettel’s retirement seemed on Sunday, there is still a question about whether he will return to F1 in the future. Many in the sport, including Hamilton, believe he could still make a comeback as a driver — perhaps when German car giant Audi enters F1 in 2026 — and many more see him fitting into a managerial role within a team or F1 itself.

But what Vettel has made clear is that none of that will happen before he has had a chance to spend some quality time at home, relaxing with his family and reflecting on his phenomenal career.

“I had a great time across all these years and was able to enjoy success, win championships, so from a sporting point of view it’s been huge,” Vettel said on Sunday evening in Abu Dhabi. “But I’ve also been able to grow and mature in many ways and reflect on a lot of things.

“It’s always been the same rhythm season-by-season, but nice and for me I’m very happy I was able to build so much off the track. I found a partner — now wife — that I’m very, very in love with still after so many years. We’ve got three kids. I look forward to spending more time at home with the dog.

“So things that might sound really boring but I’ve built next to the racing and will hopefully be able to enjoy. Then we’ll see what happens, I’m restless in many ways and interesting in lots of things so give those a bit more room.”