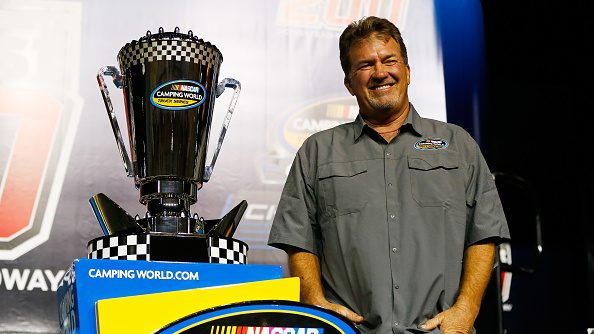 NASCAR Cup Series history is filled with drivers who never won a race — many who never came close to winning.

Some popped onto the scene for a few races, realized the difficulties associated with success, and moved on. Others stayed for years, generally satisfied with running somewhere in the middle of the pack and making enough money to show up at the next race.

Others were good enough to run consistently in the top 10 but couldn’t break through the checkered curtain.

This week, with the off-season upon us and most of racing at rest, NBC Sports NASCAR Power Rankings takes a look at the best drivers (inactive with at least 100 starts) who, for one reason or another (or maybe several reasons) , never took a Cup checkered flag first:

1. Mike Skinner (286 starts) — Skinner won the first Truck Series championship in 1995 and scored 28 Truck wins and one Xfinity victory but could not break through in the Cup. His best Cup seasons were as a teammate to Dale Earnhardt Sr. at Richard Childress Racing.

2. Rick Mast (364 starts) — Mast famously won the pole for the inaugural Brickyard 400 at Indianapolis, giving him the opportunity to entertain a new group of sports writers with his tale of trading a cow for a race car. He had seven top fives and 36 top 10s in the Cup along with nine Xfinity Series victories.

3. Dave Blaney (473 starts) — An accomplished driver at many levels, Blaney had 28 Cup top 10s but is perhaps best remembered for a race in which he finished 15th — the 2012 Daytona 500. That race included one of the craziest moments in the sport’s history as driver Juan Pablo Montoya hit a track jet dryer during a caution period, causing it to explode and damage the track. During the two-hour red flag needed to repair the damage, Blaney led the race. If the track could not be repaired or bad weather returned and the race ended early, Blaney would win the 500. He didn’t.

4. Kenny Wallace (344 starts) — Wallace is most famous for a second-place finish — one of 27 top 10s in his Cup career. He drafted behind Dale Earnhardt Sr. over the closing miles of the October 2000 race at Talladega Superspeedway, boosting Earnhardt to what became his final victory. Wallace won nine Xfinity races.

6. Richard Childress (285 starts) — Childress made the NASCAR Hall of Fame by building a championship team with driver Dale Earnhardt Sr. His driving career did not reach that level, but he finished in the top 10 in points five times and had 76 top 10s.

7. Dick Trickle (303 starts) — Trickle won so many short-track races they eventually stopped counting. He had mixed success in the Cup with 15 top fives and 36 top 10s. A claim to fame: Trickle was named Cup Rookie of the Year in 1989 — at the age of 48.

MORE: Dr. Diandra looks at 2022 through the numbers

Honorable Mention: JD McDuffie, who made a record 653 starts without a win before losing his life at Watkins Glen International in an accident in 1991.