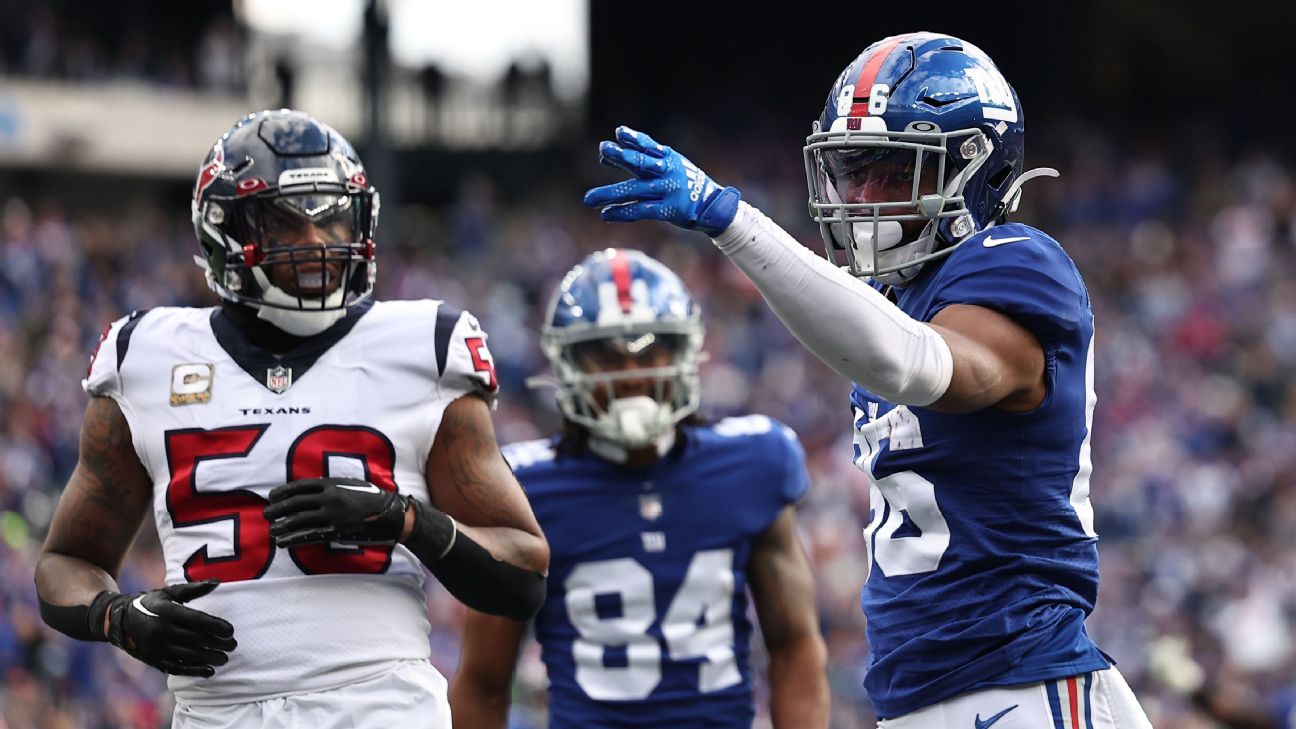 Our NFL Nation reporters answer fantasy football questions every Tuesday during the season. Here’s what they had to say following Week 11.

This offense needs a receiver to step up, and Demarcus Robinson (9 catches, 128 yards) did that against the Panthers. Is this anything fantasy managers need to act on or simply a one-week outlier?

Consider it an outlier because of Lamar Jackson’s history. Since 2019, Jackson has completed 449 passes to wide receivers, which ranks 22nd in the NFL. Jackson has always preferred throwing to tight ends. This is why Mark Andrews is the only safe fantasy play in the passing game. But Robinson might have a chance to produce consistently if he continues to get open. On Sunday, Robinson was open (3-plus yards of separation) on five of his nine targets, according to Next Gen Stats. The Ravens will also look to get wide receiver Devin Duvernay more touches, which could impact Robinson’s productivity. — Jamison Hensley

Did James Cook (11 carries, 86 yards) do enough to earn an expanded role, and if so, does it cut into Devin Singletary’s bottom line?

Consistently? No, we’re not there yet. But it is something to keep an eye on as the Bills’ offense continues to work on that running game. Singletary is still the lead back, but this offense is still evolving. Eventually Nyheim Hines has a chance to get more involved in the offense as well. Cook easily set a career-high in yardage, and while the Bills are continuing to ease him in, there’s not yet an indication that his success will be the same from week to week. Singletary is still going to see a significant number of opportunities and Cook may develop more of a consistent role as the season continues. — Alaina Getzenberg

Is it time to give up on D’Andre Swift getting to a 15-touch role at any point down the stretch?

At this point, Jamaal Williams has pretty much established himself as Detroit’s lead back mainly because he’s available. Shoulder and ankle injuries that sidelined Swift for three games continue to linger, but he has played through the pain. If he’s able, the coaching staff could reward him with a 15-touch game, but I don’t feel like that would be his consistent role for the remainder of the season with Williams finding his groove. Williams currently leads the NFL in total rushing touchdowns (12) and is coming off a three-touchdown performance in Detroit’s victory over the New York Giants — their third straight. Lions running backs coach Duce Staley is known to ride the hot hand in the backfield. — Eric Woodyard

Seventy-five catches, 997 yards and 12 TDs … that was Davante Adams’ stat line in his first season as a featured target in Green Bay. Let’s get bold: Christian Watson in 2023, over/under each of those thresholds?

That was Adams’ third year in the NFL. He was more seasoned than Watson will be, so let’s go under on the catch total. However, Watson runs with a bit more speed than Adams did (plus he has the extra game that Adams did not in 2016) so there’s a decent chance for the over in yardage. Even though Watson has five TDs in the past two games, going over 12 next year still seems like a stretch. So it’s under there, too. (And if Aaron Rodgers isn’t the quarterback next season, then I reserve the right to change to the under on all three.) — Rob Demovsky

Parris Campbell continues to get plenty of looks with Matt Ryan under center. How close do you think he and Michael Pittman are in terms of targets/yards the rest of the way?

The change in play caller from Frank Reich to Parks Frazier has made it a little difficult to predict certain things, but here’s a good sign for Campbell: He’s played 80% of offensive snaps in both games since Frazier took over. That’s about where he’s been all season, so it suggests he continues to be a big part of the team’s plans post-Reich. Ryan is also adept at throwing the crosses that Campbell likes to run, so they are a good fit for each other in that regard. Their chemistry was clear as far back as training camp and I would expect it to continue to remain that way the rest of the season. — Stephen Holder

Should fantasy managers read anything into Damien Harris getting more carries than Rhamondre Stevenson (5-2) in the first quarter? Stevenson is the option in the passing game, but is he at risk of losing ground work?

This falls more in the category of a changeup to show the Jets something different, as the teams had met three weeks earlier and Stevenson had been the top back that day. So while the change was unexpected this week, it falls in line with Bill Belichick’s game-plan-specific approach. The team’s confidence in Stevenson, who played 49 snaps against the Jets compared to 15 for Harris, remains high. — Mike Reiss

Should fantasy managers be buying into this scoring outburst from Juwan Johnson?

To a point. Johnson, a converted receiver, is clearly coming into his own as a second-year TE and the Saints look to him before their other TEs in two-minute situations and often in the red zone. He will certainly continue to be used. Whether the Saints offense can be trusted to continue to get him in the end zone is another story, but if the Saints are in situations where they need to throw often to catch up, Johnson will be one of the heavy targets. — Katherine Terrell

Can we count on volume like this from Darius Slayton?

The Giants are running out of trustworthy receivers. Slayton is the only constant in this group, with at least six targets in three of the past four games. He is Daniel Jones’ safety blanket and the clear-cut WR1 for the Giants. Slayton is the only player on their roster that you can count on to catch multiple balls each week. He’s a decent WR2 fantasy option the rest of the way, especially considering the Giants could be in catch-up mode more against quality competition down the stretch. — Jordan Raanan

True or false: There is not a single Jet fantasy managers should even consider starting.

False. Yeah, the Jets look pretty bad right now on offense, coming off a do-nothing loss to the Patriots, but RB Michael Carter deserves starting consideration this week against the Bears. The Jets will lean heavily on their ground game, and the Bears are ranked 29th in rush defense. — Rich Cimini

Has Najee Harris turned a corner for his loyal fantasy managers?

I’m cautiously optimistic that’s the case. Harris has come on strong since the bye week with back-to-back games of at least 90 yards — his best two outputs of the season. Harris is running with conviction, and he looks more like the 2021 version of himself with hard, downhill runs. The Steelers’ offense is still inconsistent even quarter to quarter, but Harris is steadily producing. — Brooke Pryor

Treylon Burks led this team in catches (7), targets (8) and yards (111) on Thursday night. Is this a flash in the pan or a late-season difference-maker for fantasy managers?

Burks’ success should be a sign of things to come in the future. But his target share could be inconsistent. The Titans have tried all season to scheme up ways to get him the football. Unfortunately, opportunities aren’t always abundant because of the Titans’ focus on the run game. Still expect Burk to make big plays via the play-action passing game. The 51-yard reception that Burks made to seal the Packers game is an excellent example of how Burks and quarterback Ryan Tannehill can take advantage of one-on-one opportunities when teams focus on stopping Derrick Henry. — Turron Davenport