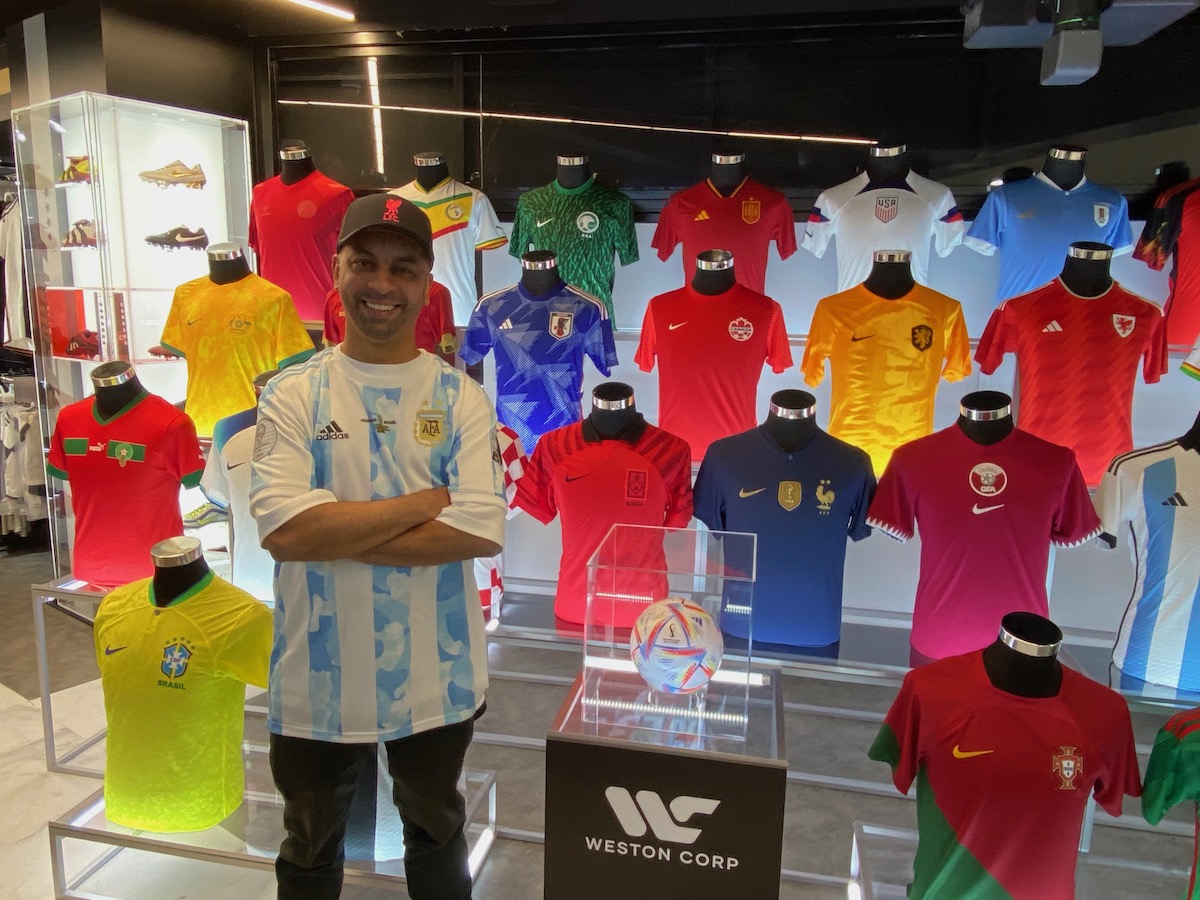 SINGAPORE — Ami Chopra’s eyes lit up as he spoke about a long-time customer of his Weston Corporation football merchandise store at Queensway Shopping Centre.

“He started coming to our store when he was a young boy in the 1990s. About 15 years later, he was bringing his two young kids along to the store,” the 43-year-old co-owner and sales director recalled during an interview with Yahoo News Singapore at Weston Corp’s new flagship store in the same, aging mall on Thursday (November 17).

“Seeing generations of customers at our stores, it makes it all worthwhile to keep doing this, keep bringing in quality jerseys and equipment. It’s also partly why we don’t want to leave Queensway – our long-time customers still prefer to shop here with their families. This is still our top-selling location.”

Such loyalty and dedication to their long-time customer base is what Chopra feels has kept Weston Corp going, since his grandfather started the mom-and-pop sports apparel store around the Bras Basah area way back in 1949.

From moving to Queensway in the 1980s, to making the tough decision to specialize in only football merchandise in the early 2000s, to going online to serve their customer base during the COVID-19 pandemic, Weston Corp continues to thrive amid constantly changing appetite for football merchandise.

With the 2022 World Cup Finals just around the corner, it has unveiled its flagship store – two stories above its long-standing shopfront on the ground floor of Queensway – which will focus on World Cup products as well as activations and events in the future.

As patrons milled eagerly about during the store’s official opening on Thursday, taking selfies against the eye-catching “Jersey Team Formation” display of 26 of the 32 World Cup team jerseys, Chopra chatted about the Weston Corp’s journey in becoming one of the most well – known sports merchandise stores in Singapore.

Q: Queensway Shopping Center is obviously a place close to your heart.

A: It’s special to all of us in the family. I started working here part-time since I was 16. My father is the kind of guy who never spoon-fed me and my brother, and we had to work for anything we wanted to have. Soccer was always in my blood, so I had fun doing the work here at Queensway.

But this place just makes sense for Weston. Even though it’s an old mall, people of a certain age group still prefer to shop here. The ground-floor store is by far our best-performing store, even though we had to hive off parts of it for our online business during the pandemic, and everything got a bit messy.

How does Weston keep itself ahead of the game against other sports merchandise stores of its era?

It’s all about evolving and growing. Once we find that consumers’ tastes have changed, we have to change too. We actually started our online business way back in 2002, and you’ll be surprised that we still have customers from South Korea who ordered jerseys from us during that year’s World Cup.

Nowadays there are many more jersey collectors, some of whom are willing to fork out a lot of money for vintage or rare jerseys. They are so knowledgeable with every bit of history behind the jerseys, and we will try to hunt down the jerseys they want.

But one thing that remains constant is that we try to keep things as affordable as possible. Sometimes we took hits to our profits; for example, shipping costs have gone up like crazy these days, like almost three times the costs before the pandemic. But we decided to cut into our profits, because for us it’s more important that customers pay the right price.

What does the future hold for Weston Corp?

We intend to finally expand out of Singapore to Southeast Asia. We already have six outlets in all corners of Singapore, so there’s probably not much more we can grow here.

Some of us in the family have thought about expanding overseas for a long time, and it’s finally in the works, and will probably be opened somewhere in Southeast Asia.

Looking back at the history of Weston, did your family ever envision that it will still be going strong in 2022?

I mean, it’s a funny story, right? Back in those days, all the mom-and-pop stores sold everything, from soccer boots to tennis rackets to running shoes. Back then, if you told someone that you wanted to open a specialized store that just sold football stuff, people would say you were mad.

But our stores were getting so crowded and cramped, we began to think about specialization as a way forward. It took a lot of persuasion before my dad finally agreed, and slowly we began to stand out from the rest of the sports stores in Singapore. We were able to bring in more jerseys than anyone else, even North Korean national jerseys – I think we’re probably the only store that sold those jerseys outside of the country.

Do you have a story tip? Email: [email protected].