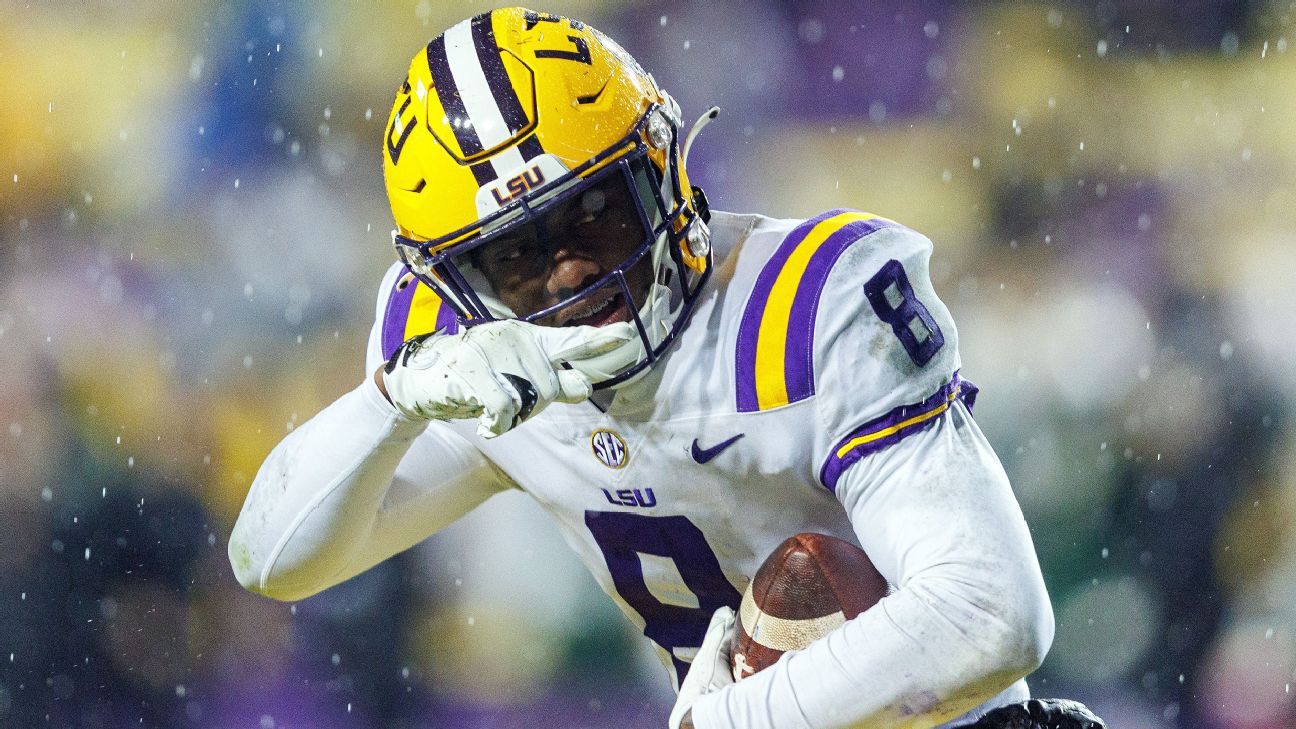 I initially set out to see what a BCS-style formula might do differently than the College Football Playoff committee. Instead, I found a formula to predict the committee’s actions.

Over the last couple of weeks, I have used a formula similar to the old BCS format — two-thirds derived from poll averages (the AP and coaches polls) and one-third from computer averages (FPI and SP+ to simulate “best, “strength of record and résumé SP+ to simulate “most deserving”) — as an alternate way of ranking teams for playoff selection purposes. (I am ever-so-creatively calling it The Formula.) Last week, the CFP committee agreed with The Formula’s top 14 teams. It’s been a heartening exercise for both making sense of the committee and accepting its rankings, but it’s also admittedly been pretty easy. The top four are pretty obvious at the moment, and last week’s top 14, via The Formula, matched the straight poll averages.

Now, however, things get trickier. Tennessee’s shocking blowout loss to South Carolina created a bit of a free-for-all at the No. 5 spot. So let’s once again check out what The Formula has to offer, then we can see if the committee departs from the script in Tuesday night’s rankings release.

Before we dive into this week’s rankings, let’s look again at last week. The top four teams were all unbeaten heading into Week 12, and with a loss only to top-ranked Georgia, Tennessee slotted in as a pretty easy No. 5. With Oregon’s stock dropping after its loss to Washington, the No. 6 spot was a tight battle between 8-2 LSU, 9-1 USC and 8-2 Alabama, with Clemson a bit further back at No. 9.

What does The Formula say this week?

As always, let’s begin with my résumé rankings. While my SP+ ratings, like ESPN’s FPI, are designed to be predictive and forward facing, I created what I call “résumé SP+” in an attempt to look backwards at how a team has played against its opponents.

Résumé SP+ is a look at two things: (1) how the average SP+ top-five team would be projected to perform against a given team’s schedule — in terms of scoring margin (which I cap at 50 points) instead of straight wins and losses — and (2) how the team’s scoring margin compares to that projection. Throw in a seven-point penalty for every loss a team has suffered (because losses matter on the résumé!), and we have what the CFP rankings would look like if SP+ and only SP+ were in charge.

The biggest difference between a tool like this and the ESPN Stats & Information Group’s strength of record — a tool the committee has access to during its deliberations — is that it is based on scoring margin, not straight wins and losses. It adds dominance as a variable. That two-loss Alabama and Tennessee teams still rank ahead of USC and Clemson (and Penn State also ranks ahead of Clemson) despite the seven-point loss penalty says quite a bit about the lack of dominance that both the Trojans and Tigers have demonstrated to date. USC has an elite offense and terrible defense, while Clemson is good but not particularly elite in any department.

Combining these two approaches to résumé ratings, along with the two in-house power ratings mentioned above — my SP+ ratings and the Stats & Information Group’s FPI — gives us a pretty sound blend. Throw in poll averages, and here are this week’s results.

The Formula, this week:

Moving in: Coastal Carolina (from 26th to 24th)

This week’s most interesting questions

Who’s No. 5? That’s clearly the top question of the week. It would be a shock if the top four changed in any meaningful way: Georgia and Ohio State beat pretty similar foes (Kentucky and Maryland) by similar margins (16-6 for Georgia, 43-30 for Ohio State), while Michigan and TCU both needed last-second field goals to beat Illinois and Baylor, respectively.

Tennessee’s shocking loss, however, opened a door. And thanks to a boost in both the résumé rankings and poll averages following a 48-45 win over UCLA, USC might be poised to walk through it. The Formula bumped the Trojans to fifth, just as the polls did, and I figure the committee is likely to do the same.

The challenges are just beginning for the Trojans, of course. For starters, they must take on ranked foes in each of the next two weeks. Notre Dame visits the LA Coliseum this Saturday, and then the Trojans will face either Oregon, Utah or Washington in the Pac-12 championship game in Las Vegas. Per SP+, their chances of winning both games are only 36%.

If the Trojans do win out, they’ll have a pretty strong résumé, having increased their total of ranked wins from zero to three over the final three weeks of the regular season. But will that be enough to push them ahead of an 11-1 Ohio State or Michigan (depending on who loses to whom in Columbus on Saturday)? What about an LSU team that upsets Georgia in the SEC championship game? There’s a chance that this won’t matter — SP+ only gives TCU a 45% chance of winning out, so there might be multiple spots in the top four available — but to feel good about its top-four chances, USC does need to slide ahead of LSU in Tuesday night’s rankings. I assume the Trojans will do just that.

Does Clemson pass Alabama? Last week, The Formula spit out rankings that were awfully similar to the poll averages themselves. This week, the computer component of The Formula disagreed with the polls a bit, slotting Alabama ahead of Clemson and both Tennessee and Penn State ahead of Oregon. The latter might only matter when it comes to New Year’s Six bowl selections, but Clemson’s positioning means a lot.

Dabo Swinney’s Tigers moved to 10-1 with an easy win over Miami on Saturday and have exceeded projections by healthy margins for two straight games after a debilitating loss at Notre Dame on Nov. 5. But they still have a lot of ground to make up. They have beaten just one ranked foe — a Florida State team that is playing much better now than it was when it lost 34-28 to the Tigers in October — and lost to Notre Dame by 21 points.

It wouldn’t be a total surprise if the committee slid Clemson’s Rivalry Week opponent, South Carolina, into the top 25 this week (The Formula bumped the Gamecocks from 55th to 31st after their big Tennessee upset), but even then the Tigers won’ t get the same big strength-of-schedule bump that either USC or LSU will get in the coming weeks. Their ACC championship game foe, North Carolina, just lost to Georgia Tech and is looking at a pretty big stumble in this week’s CFP rankings.

My bet is that the committee ranks Clemson seventh, ahead of Alabama, but if it follows The Formula’s lead and keeps Bama ahead, that probably says devastating things about the Tigers’ playoff hopes.

Where does Tennessee fit in all of this? The Formula dumped Tennessee from fourth to ninth following the Vols’ loss, but the way the committee tends to respond to head-to-head results could make things awkward.

How will Saturday’s top games affect the College Football Playoff chase? What are the current odds for the top four? The Allstate Playoff Predictor has the answers. Check back every week as the odds are updated following that week’s games.

There are plenty of examples of the committee ranking a team higher (or lower) than it should based on head-to-head results. Here are three from recent history:

• In 2019, 10-2 Alabama fell from fifth to ninth in the AP poll following a loss to 9-3 Auburn, but the committee insisted on ranking Auburn higher and therefore bumped the Tide all the way down to 12th. (Auburn was 11th.)

• In 2021, the committee continued ranking one-loss Oregon ahead of one-loss Ohio State for weeks, despite both polls and computers (and eyeballs) showing that the Buckeyes had been the far better team since Oregon’s Week 2 win in Columbus.

• In this year’s initial rankings, The Formula suggested LSU should rank 15th, but the committee ranked the two-loss Tigers 10th to make sure they were ahead of a one-loss Ole Miss team they had beaten.

It’s hard to make the case that Tennessee should rank higher than ninth at the moment after such a dreadful Saturday night performance, but the Vols have head-to-head wins over likely No. 6 LSU and a Bama team that will probably rank either seventh or eighth. Does the committee break from The Formula to ensure that the Vols are ahead of either or both?

(We won’t talk about the potential effects of Hendon Hooker‘s injury here — the Vols’ star quarterback was lost for the season with an ACL tear — because I don’t feel that should directly matter in these rankings.)

How is the Group of 5 race shaking out? It had seemed pretty clear in recent weeks that the AAC race was also the de-facto race for the Group of 5’s automatic New Year’s Six bowl slot. But UCF’s home loss to 4-7 Navy blurred that picture a bit. That’s a bad loss. The Formula dropped the Knights from 17th to 25th, and it wouldn’t surprise me if the committee knocked them out of the rankings altogether.

Depending on how events shake down this weekend, four teams still have a shot at the AAC title: Tulane (currently 20th, per The Formula), Cincinnati (21st), UCF (25th) or Houston (50th). Meanwhile, 9-1 Coastal Carolina (24th) and 9-2 UTSA (26th) could creep into the CFP rankings this week — especially if UCF drops out — and both could win their respective conference titles.

Considering this week’s Cincinnati-Tulane winner will have an extra quality win on his résumé (and will be favored to win the AAC championship a week later), odds still favor the AAC champ getting the nod. But it’s less certain than it was a week ago.